Afterlife Expansion for Death's Gambit is a brand new and upcoming game DLC expansion. It is said to be the biggest expansion on any metroidvania. It features all new weapons, reimagined maps and mechanics, and endings for revisiting players to experience in a whole new way.

"Death's Gambit: Afterlife is the new and expanded edition of the original hardcore 2D RPG action platformer. Master the precise combat, utilizing a wide variety of weapons and abilities to confront the horrors that lurk within Siradon. Explore a mysterious and unforgiving world and uncover the true price of immortality.

Afterlife offers players a wealth of new content to experience on top of the original game, including 10 new levels, over 30 weapons, 5 new bosses, mechanical overhauls, and more. Your choices will affect the epic finale to Sorun’s tale."

As part of the new Afterlife expansion of the game players will experience a new full scale re-imagining of the original game that refines all existing systems based on community feedback.

Afterlife is the largest expansion to any metroidvania ever.

Siradon has changed, but immortality still runs rampant. Through sacrifice and regret, Sorun finds himself at the start of his journey once again. But this time he wields choice. Greater choice in character customization, weapon variety, talents, and more. Guide his blade, and ultimately decide whether to fulfill his pact with Death, or succumb to the allure of immortality?

Changes to systems and mechanics have been made to the existing Death's Gambit: 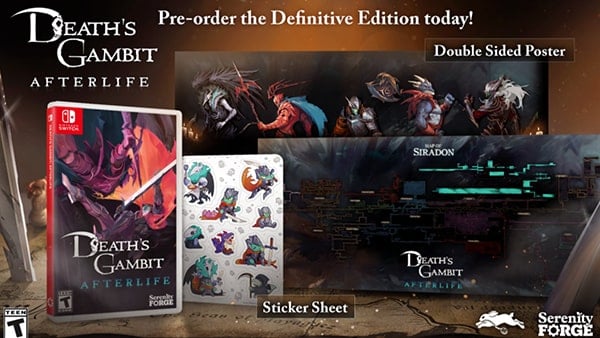 Listed below are the following assets recieved for ordering the Definitive Edition for $34.99 on Serenity Forge's website. 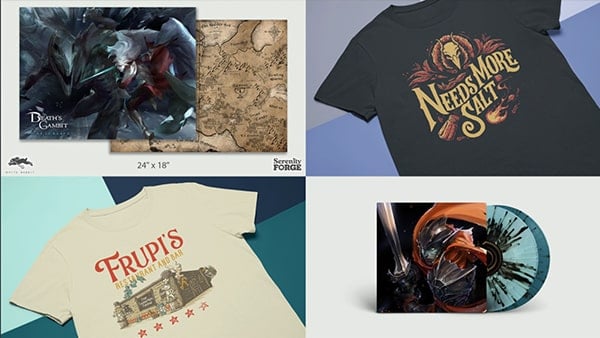 New merch is also available for pre-order at the Serenity Forge store.

Afterlife is automatically the chosen version when downloading the game. You can play the classic version on Steam by going to the game's settings then betas, and selecting "originalgame." 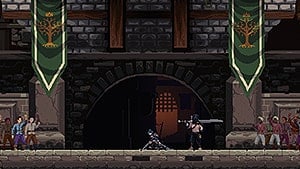 As soon as you start the game after speaking to Vrael for the first time, instead of going right to trigger the first meeting with Death, go left and leave. You'll be given a prompt that asks you if you're sure to leave Siradon and return to Vados. Simply choose yes and you'll find Sorun back in Vados where he is sentenced to death by the king. This is considered a bad ending. You simply return back to the starting point where Sorun was killed during the expedition. 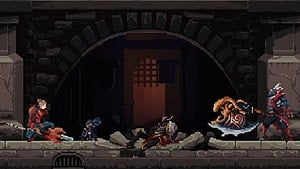 Ending A is the true ending of the game. Players will need to defeat five Heroic Boss battles before you face Endless at the top of Caer Siorai. During our playthrough, we've defeated the heroic battle of bosses such as Ione, Owlking, Soul of the Phoenix, The Bulwark of Aldwynn, and Tundra Lord Kaern. After defeating five of the bosses, head on over to Caer Siorai and fight Endless. Once she is defeated, interact with the Source of Immortality and a cutscene will trigger, which then takes you to the Afterlife location. After the cutscene, you will then need to make a choice, to side with Death or Thalamus. Simply choose to side with Death.

Next, you'll return to Caer Siorai and then fast travel to Garde Tum, head to the far west side of the map, towards the only locked door, and along the way, you'll encounter the AI that you met during your first arrival at Garde Tum. Follow the AI to the locked door which again is at the west side and it'll be unlocked for you, allowing yourself to enter the Chamber of Migration.Work your way through the facility and make sure to explore thoroughly and then defeat the Aberrant AI.

After defeating the boss, Death gives you a Soul Shard, fast travel to Fupris and head east towards the entrance of the underground of Caer Sioria where you first fought Endless. Approach the bodies of Vrael, Ione, and interact with it. Next, head to the boss arena in Caer Siorai where you fought Endless and choose to Soul Dive the body of Everly.

Once you've dealt with soul diving all three of your comrades, you'll be taken to another place where you will need to choose certain options to regain your memory. Here are the answers that follow:

By choosing these options, Sorun will fully regain his memories and will arrive at the Collapsing Nightmare. Just go east until you reach a Death Idol, make sure to use it to save. Continue going east and by the ledge, you'll see a little girl. Interact with it to save her soul and head all the way down to the bottom of the area while you fight lesser versions of previous Bosses you've fought until you reunite with Vrael, Ione, and Endless. Eventually, you'll reach the end point of the location where you'll be drawn into Thalamus' void. Simply stay alive and interact with the orbs of light to regain your memory The answers are as follows:

The game then prompts the New Game + menu where you are given the option to select your difficulty. DO NOT CHOOSE SINCE THIS WILL BAIT YOU INTO A NEW GAME. Wait for a few seconds, and you'll see dialogues from your comrades telling Sorun to wake up. Eventually, Sorun awawkens and you'll be in Vados, the last area of this game. From here, make further preparations before heading outside for a final battle against the Avatar of Thalamus - again, you will receive help from Ione, Vrael, and Everly (Endless). 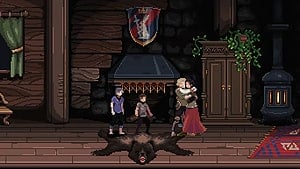 For ending B, the concept is quite similar Players will need to defeat five Heroic Boss battles before you face Endless at the top of Caer Siorai. During our playthrough, we've defeated the heroic battle of bosses such as Ione, Owlking, Soul of the Phoenix, The Bulwark of Aldwynn, and Tundra Lord Kaern. After defeating five of the bosses, head on over to Caer Siorai and fight Endless. Once she is defeated, interact with the Source of Immortality and a cutscene will trigger, which then takes you to the Afterlife location. After the cutscene, you will then need to make a choice, to side with Death or Thalamus. Simply choose Thalamus over Death.

By choosing Thalamus, you will need to fight The Crow which is Death. Defeat the boss and shortly after the dialogue cutscene between Ash and Thalamus, leave the area To the Nexus of Souls to trigger New Game Plus, as well as Ending B.

This is the original ending of the game which also applies in the Afterlife expansion. The conditions are simple, kill all of the immortals, obtain the three sigils, defeat Endless and approach the Source of Immortality. Choose to destroy the source of immortality and a cutscene will follow where you will find all of the beings on Siradon loses their immortality and perishes. At the end of the credits, a familiar voice speaks to you and tells you that you've completed your task of containing the source of immortality, as well as freeing Sorun's mother. However, no one will remember the sacrifice that Sorun's mother has given, as well as not knowing that she has fallen in Caer Sioai - this then follows onto New Game Plus.