Darkness Falls is a Locations in Death's Gambit. 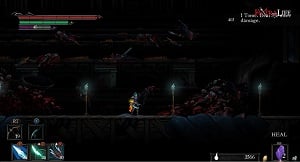 After defeating Origa in Aldwynn, you're able to proceed into the Immortal Citadel by continuing right. However, we'll be visiting the Darkness Falls first, so head back to the Central Sanctuary. If you speak to Bast, he'll suggest his true intentions and will kill more of the people that you bring to the Sanctuary; you can kill him to prevent this or let it continue. Once you're here, you may also want to stock up on a few Sun Stones as they come in handy in the upcoming section.

Head to the candle-lit Death Statue and head down the ladder on the right, and continue all the way down past Grimguard to the flower bed. Head right and drop down the wooden platforms past the first set of poison spores. Down the slope, continue in that direction and you will be prompted with a title, letting you know you've arrived.

Making your way across the ill-lit bridge will trigger the spawning of two Phantoms. These new enemies are able to dash to avoid attacks and close space, so be wary. After passing them, here is where the Sun Stones will come in handy; this enemy known as a Recluse, can attack you but cannot be attack until you've thrown a Sun Stone their way. If you haven't any, don't worry you pick one up right before engaging this enemy, and after, next to the ladder you descend to continue your journey. Right about at the start of your descent, you should notice one of those poison spores on the right, meaning, there is a passage you can jump onto. Do so, passing all the spores to collect the Dark Knight Tome. 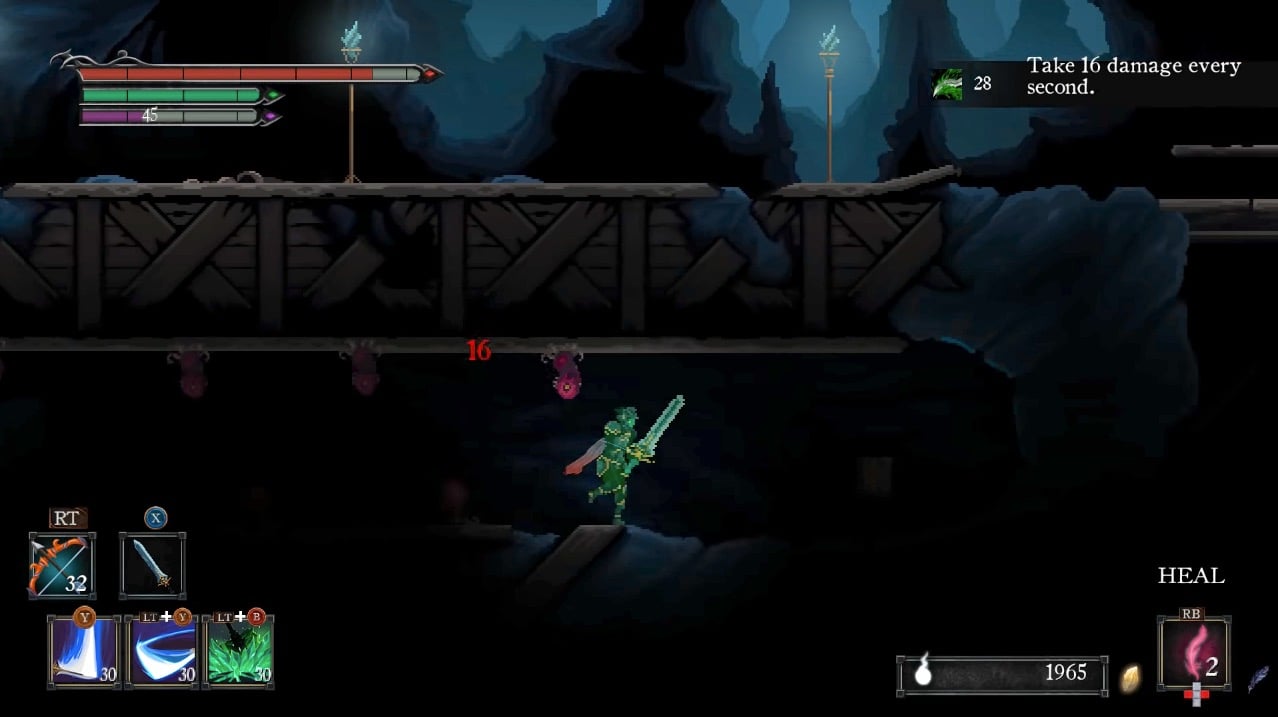 Head back and down all the way. You'll find another Sun Stone and two Slime. Continuing along, you'll notice a lamp. Jump forward from the lamp to land on a wooden platform, and jump once again in the same direction, then back the other way to arrive at a higher platform right under the first bridge you crossed when you entered the area. There's a Recluse here that drops the Spellbinder's Aura. Still heading left, double jump off the edge of the stone structure you're currently on to reach another one with a Immortalite Stone. Drop back down to the lamp and continue right to find a ladder down. Once again, right at the start of your descent, jump over to access a small passage leading to a Save Point Statue and the second Dark Knight Tome. 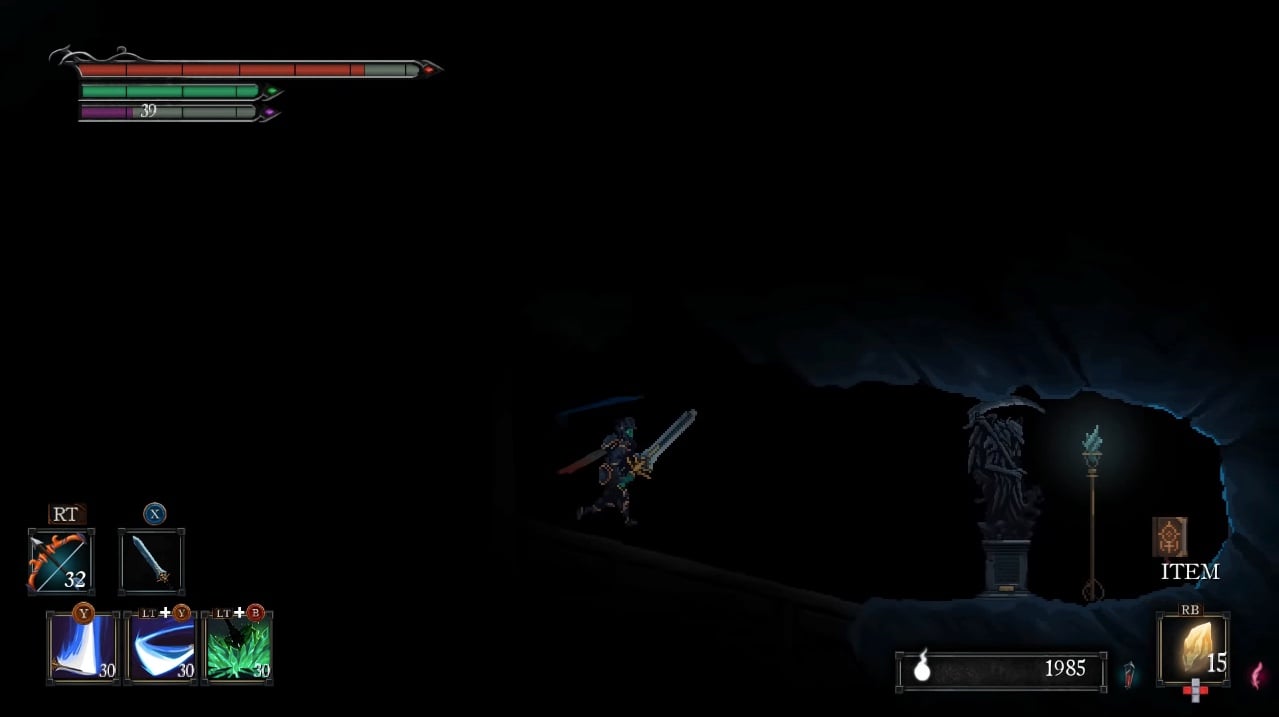 A Silent Guardian, A Watchful Protector

In the next cave you'll come across Ione, and she'll reveal to you that her father is the upcoming boss. 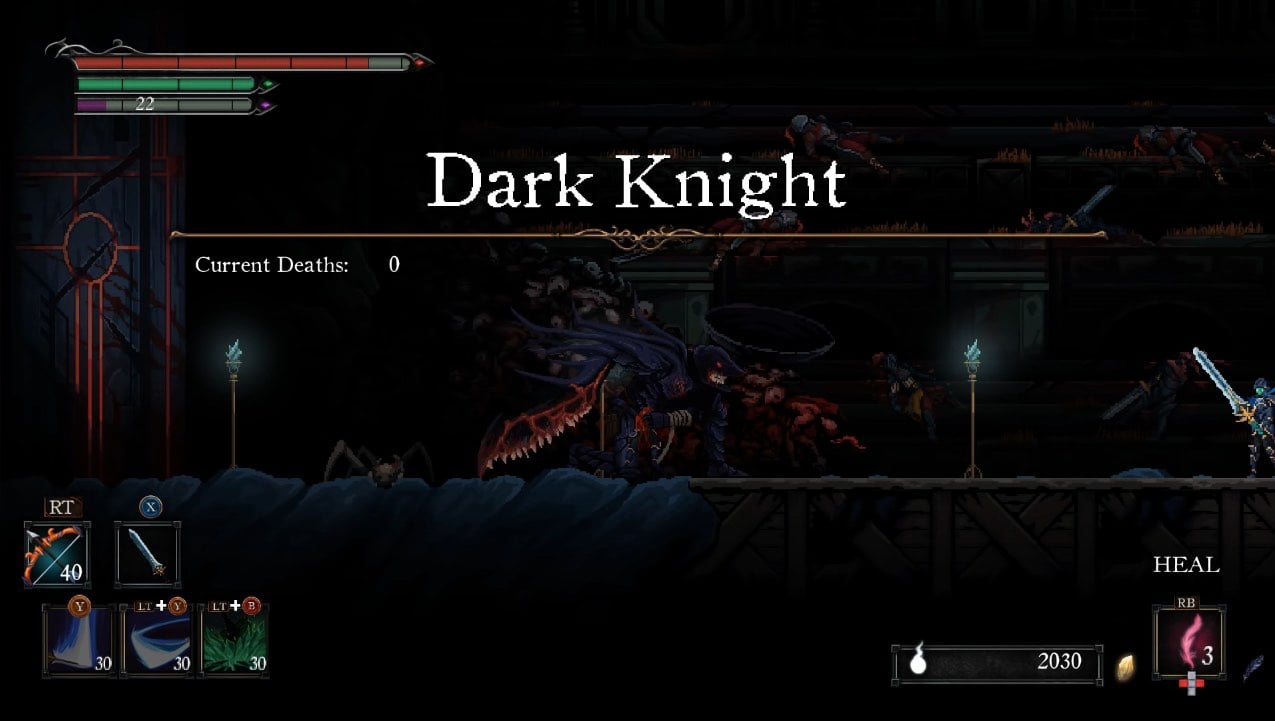 Defeating him will grant you a Talent Point, like all other bosses, but will also reward you with the Forbidden Key.

If the darkness is too much of an issue for you, you can use  Sun Stones to light your path temporarily.