Warden's Sanctum is a Locations in Death's Gambit.

From the Owlking boss fight in Gaian's Cradle, you'll once again ride through the Rider's Passage. At the end of it, you will arrive at a blue area and a door that can only be opened from the other side. Make your way up the platforms and ladder, picking up the Winding Hew as you go. At the top of the ladder, proceed through the darkness until a short cutscene pans over the Central Sanctuary, letting you know that you've arrived.

Up the steps, you will shortly arrive at a save point in the form of a giant candle-lit statue of Death. Continue right to be prompted with an exchange with Death through a crow. He will explain your mission to you, while making a rather amusing Dark Souls reference. Once the chat is over, continue right, ignore the locked door beneath for now. Continue to be prompted by another set of dialogue, this time from a new face in the form of Bast. Pick the Crow Plume on the platform beneath him then speak to him. This allows you to gain rewards from him later in the game, and can also teach you an ability. 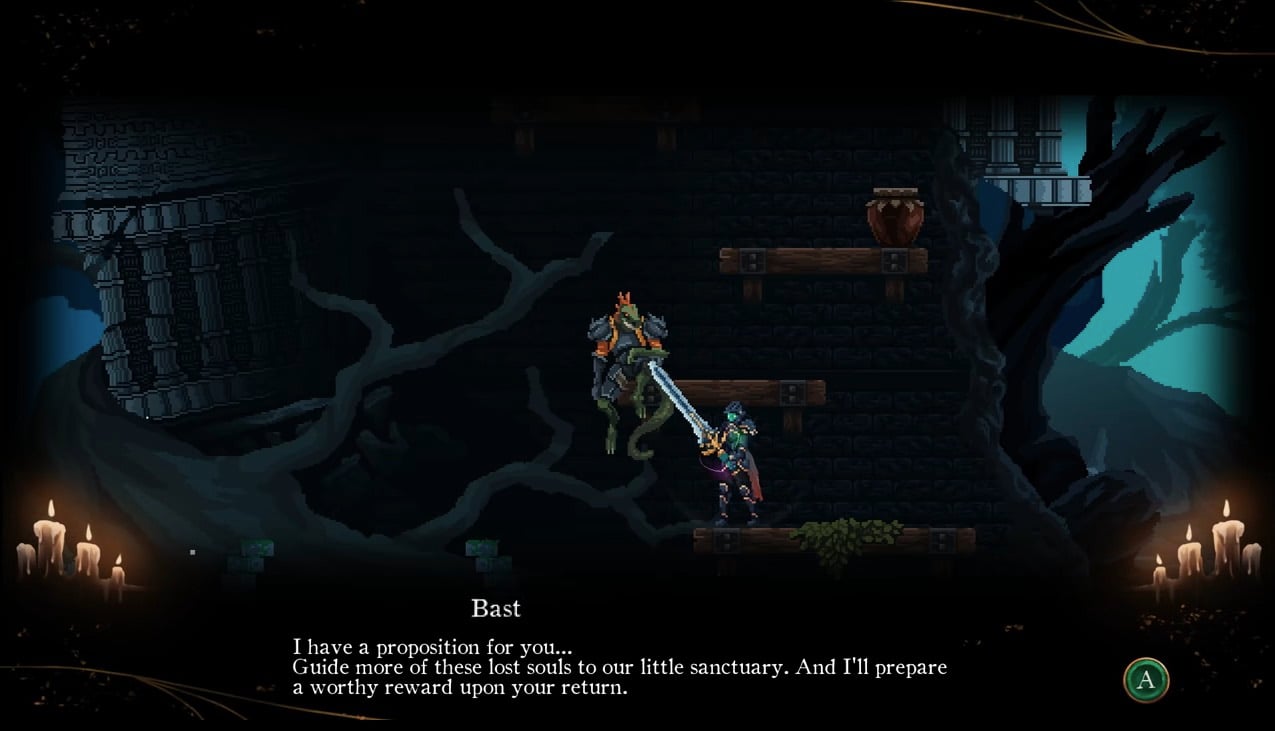 If you proceed to the right, you'll face 4 Hallowed Knights (1 Bowgun, 3 Sword). Past them you'll find an unattainable item on a higher structure and two wooden sword traps that fall when you walk under them. (I'm not sure if this is possible as I haven't tried it but) When triggering the first, try jumping on it as it falls to then jump on the platform with the item. Proceeding in this direction will bring a short cutscene of Vrael being defeated by the Bulwark. Continuing into cave will lead to the boss battle with him, however it is strongly recommended to wait a bit longer as he will be too potent for you, at this point of the game. 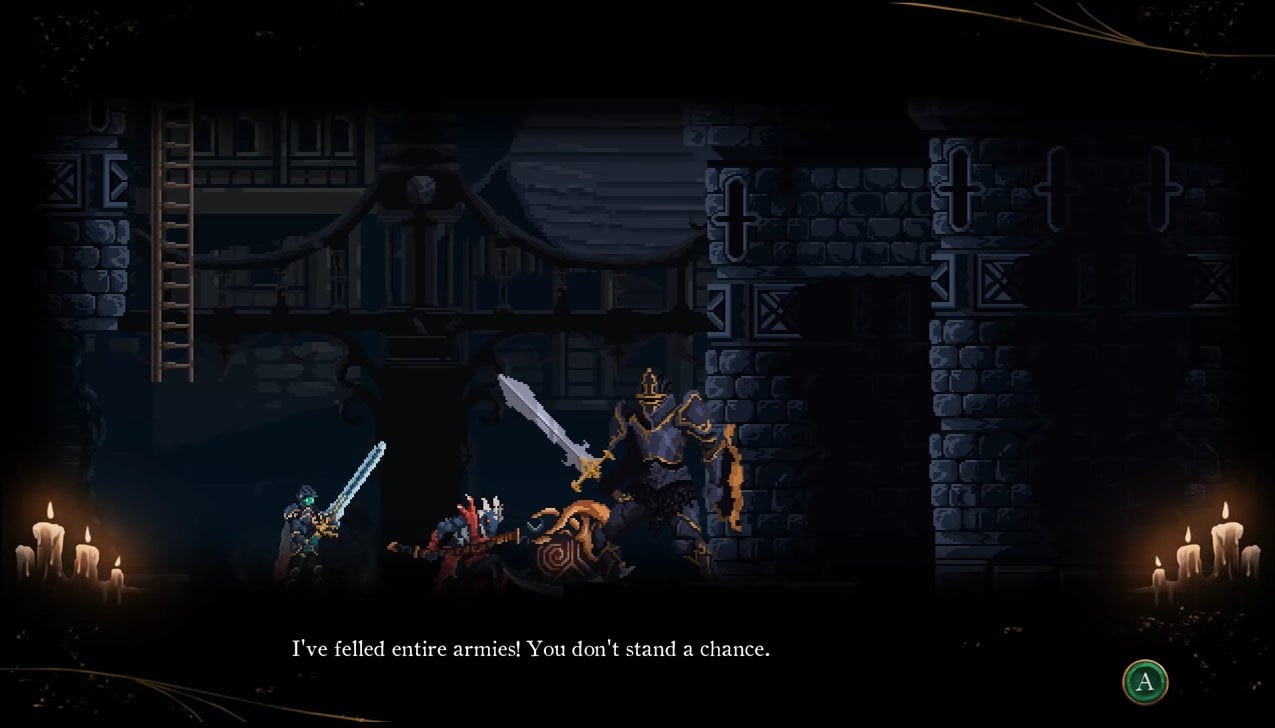 Climb the stairs here to pull a lever that opens a platform to access a ladder that takes you down to a platform with a door. Before entering, drop down all the way and climb the ladder next to it, taking notice of the item on the right. Atop, fight the Hallowed Knight (ranged), then drop off the right in a way where you can land on the platform holding the Bulwark Tome.

Climb back up the second ladder but jump off onto that alcove on the left and continue inwards. Where you will meet a drunk Gino that will offer you a Grimguard's Brew. Continue to the left to pick up the second Bulwark Tome, and open the door which only opens from the right, where you are. This will open a shortcut of sorts. Drop down from here onto the ladder and continue down until you see an item on a small ledge. Jump onto it to acquire the Spell Blade. Drop all the way down and fight 4 Hallowed Knights. From here there are two ways you can go. Going left will bring you to an Elite Drake Knight guards a passage to a door that grants you quick access between the Sanctuary and Gaian's Cradle, and going right will loop you back around to the bell by the ladders that lead to the room holding the drunken Gino.

To open another shortcut, head up the ladders, and past the red smoke monsters to fight a Hallowed Knight (Halberd & Shield) under a waterfall. After fighting him, proceed in the same direction and open the door that we ignored when we first arrived at this area.

From where Bast is, if you climb up you'll notice an item on the right behind a pillar next to the second ladder. To get this, climb both ladders then drop off the right, controlling your fall, to land on it and collect your Leaf of Gaia. There is also an elevator on top of the second ladder that requires the Crest of Gaia to power, which you don't have the access or the funds to, at this moment in time.

If you head up as if you were heading north, except jumping off the first ladder to the left, you'll land on a ruined platform. Continue in this direction and you'll come across Sigur. Talk to her and exhaust her dialogue to gain a Hastened Plume. You can also buy the Pheonix Feather Tuft from her. Continue left to talk to the merchant in the old caravan, known as Jaco. His shop contains some interesting items you may want to take a look at. In addition to his shop and exhausting his dialogue, he can also give you a run down on equipment and their scaling properties. Continue left, and kick down the ladder here to create a nice shortcut back to the statue save point from when you just entered the area. 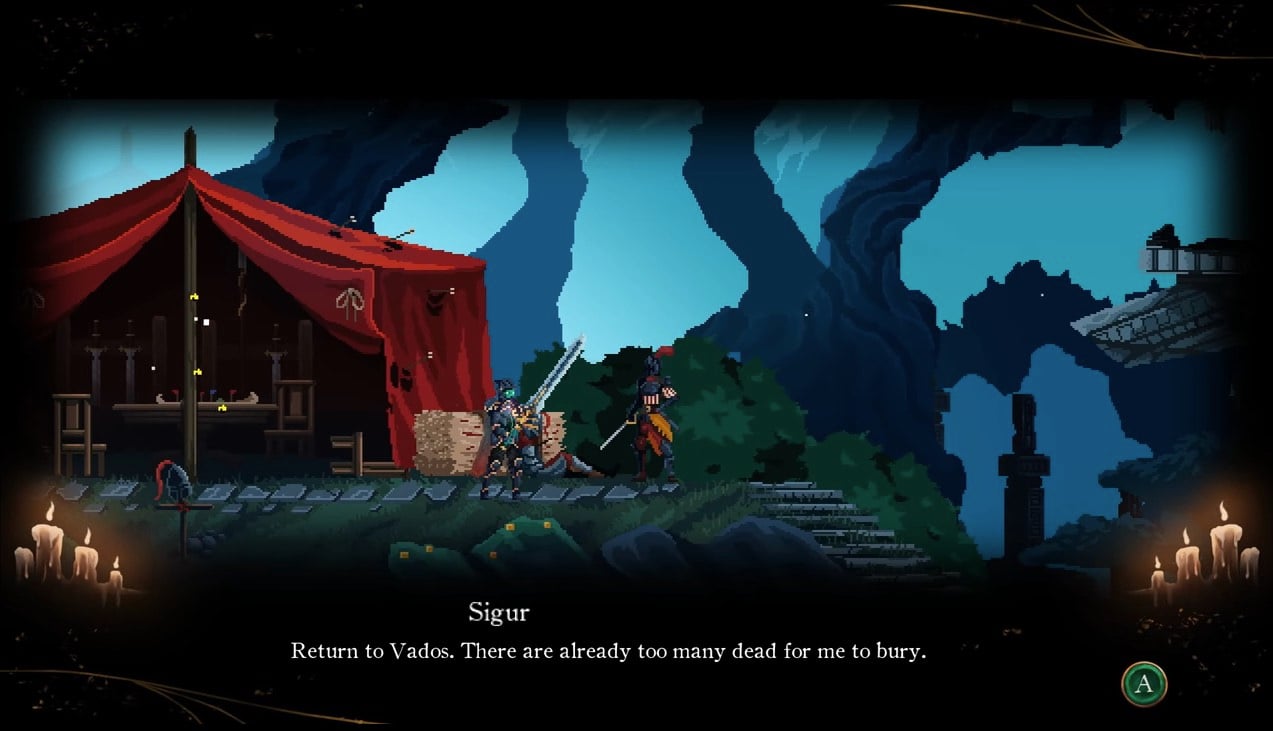 If you jump up the platforms next to the ladder, you'll find a living chest at the very top that can only be hit by ranged or jumping attacks. Break it to earn yourself the Wisp. The Shield of Warding can also be accessed from here by jumping off the platform furthest to the left, and doing a double jump (slicing the air) to the platform. From here, drop down and head west into the caves hidden by the red trees.

A Drake Vanguard (Spear Knight) will fight you upon arriving at the other end. Beyond him are two Hallowed Knights that have bowguns, and a wooden sword trap hanging above them. You can drop it by shooting at the chain holding it in place, killing one of the enemies. Drop down the platform here to pick up the Gaian Blood then drop down all the way down to reach a platform with two Hallowed Knights (Halberd & Shield). There's also a Pheonix Tome on the right, and a Gaian Blood on the left, just after the drop. Drop down to fight another Drake Vanguard (Spear Knight), and head left again.

You will emerge at an area where platforms disappear and are replaced with different ones, in sequence. Climb the first three to reach the Leaf of Gaia guarded by a flame-throwing dragon statute, that also fires in sequence -you can tell when any of them are going to fire as there's a tube through the middle of it then gets full before firing. From here use the tricky platforms to jump across to the next ladder then climb it, and use the same type of platforms to head back to the right to obtain the Casting Tome +2. Head back to the ladder, and jump down to face another Hallowed Knight with a bowgun. Continue left to enter a different area.

The blue area will greet you with a ladder and a Panacea. Heading up the ladder will bring you to a door which can only be opened from the other side, so ignore it for now and head further left to come across the giant snail Alistair. Exhaust his dialogue and he'll give you the option of buying more Panacea. Killing him will grant you the Skeleton Key which is great in itself, however prevents you from doing his questline further. 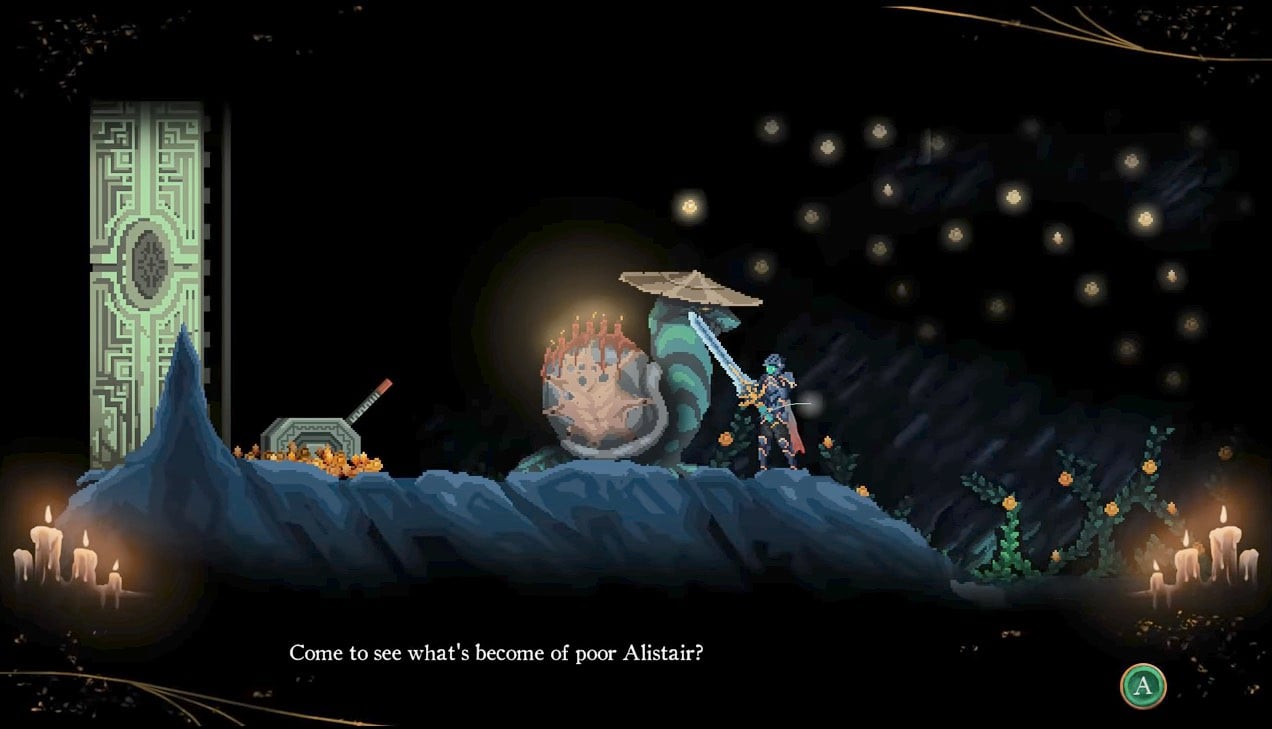 Behind him is a lever that summons a few stable platforms that bring you back down the save point in the Rider's Passage when you were passing through to the Owlking boss fight. What a shortcut! Head across the platform to retrieve the second Forgotten Giant Tome. Continuing in this direction, and taking the ladder up will bring you to the Forgotten Gaian boss fight, featuring Ione. 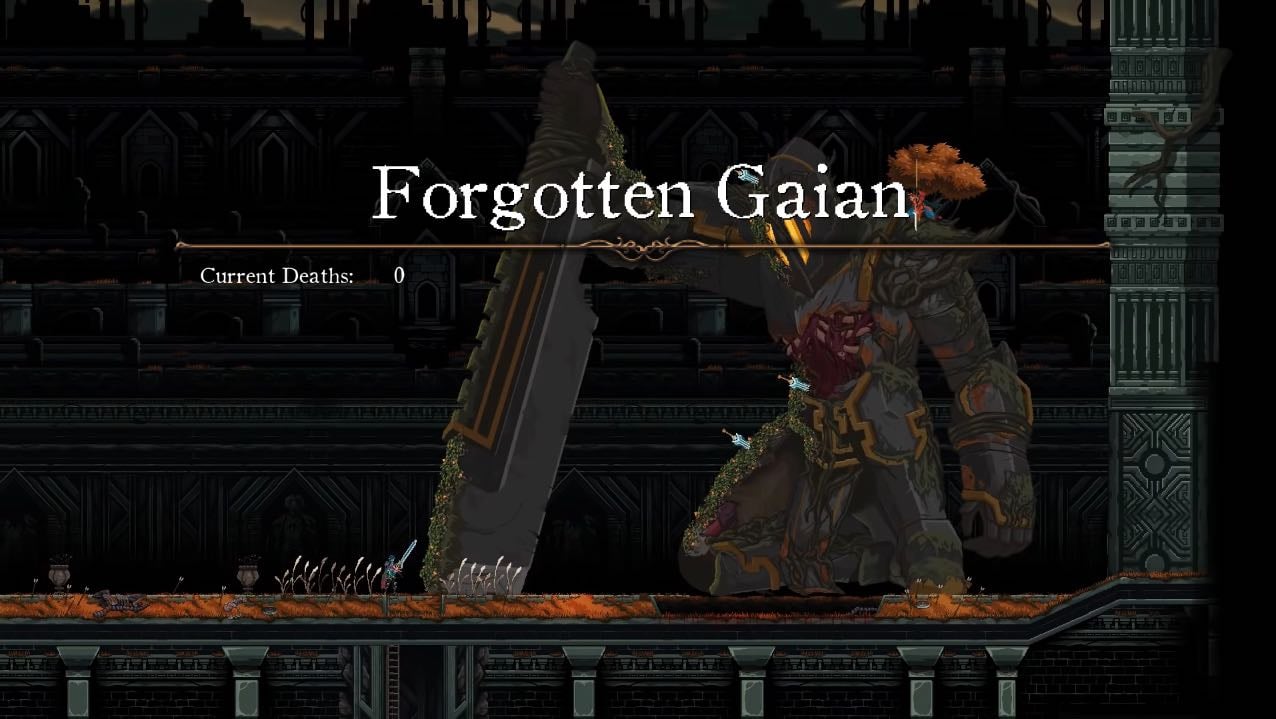