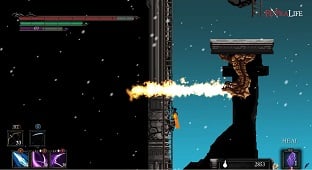 Make your way back to Central Sanctuary. Once you arrive, in case you haven't acquired the Crest of Gaia, pay Jaco a visit; if you haven't got enough, simply farm until you do. Once you've acquired the crest, head to where Bast is (or was) and go north until you reach an elevator. This brings you up to the observatory.

Immediately, you'll find a Crow Plume on the right of the elevator. Head left to engage in an exchange with Vrael, who is stood by a Save Point Statue. 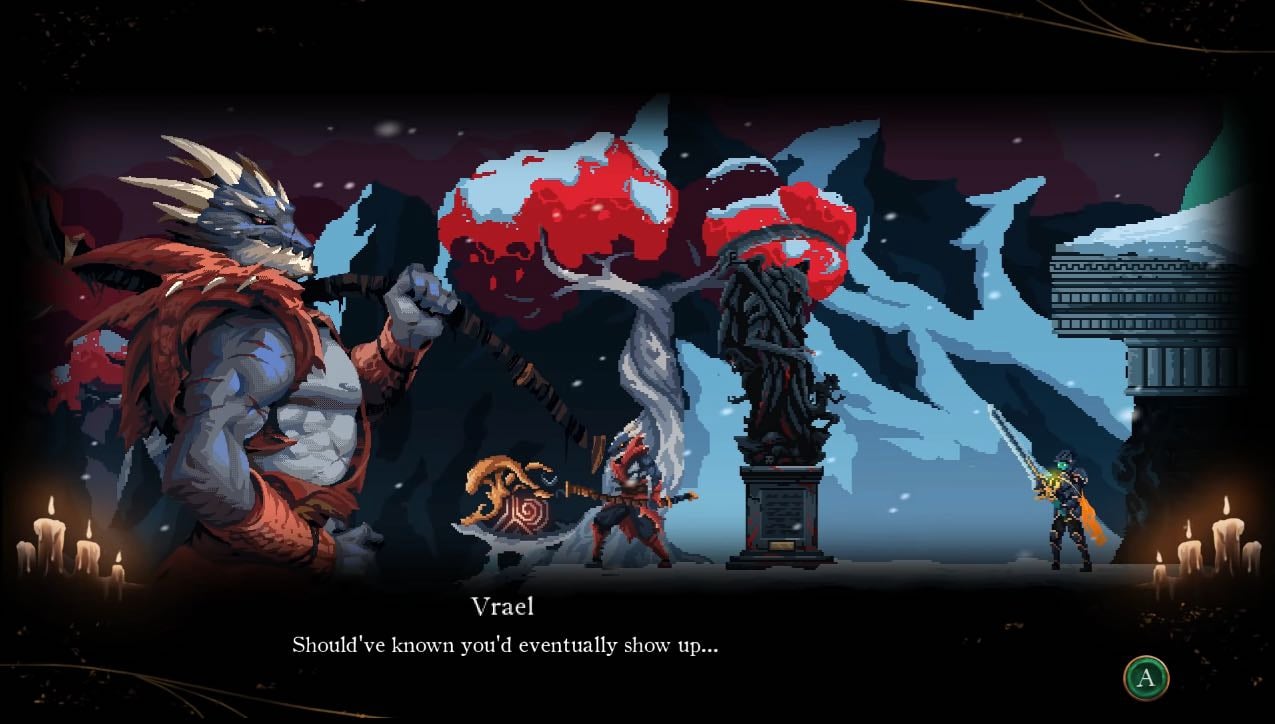 Continue left to find a Golem. While they may look imposing, the are relatively easy to deal with. Continue in the same direction to find a variation on an old adversary: the Lesser Owlking. The next enemy you find is the Abyssal Eyeball, and they are capable of doing a few things:

There are also bodies that are scattered around that release a small Parasitic Lifeform that rush you. These are small, white, and a little claw-like. They eventually die if they don't reach you in time (approx 2 seconds). However if they do reach you, they jump into your inventory and deal repeated damage until you remove them; they can be removed by opening the inventory and dropping them.

Defeat it, and another will attack you by the upcoming ladder. Once you've dealt with it, proceed up the ladder to take on an Ice Shard and then another two, accompanied by a Lesser Owlking. After you've dealt with them, head to the edge and drop off the left to acquire the Amulvaro Tome. The only way out is down,  so drop down and quickly kill the Abyssal Eye so you can take on the upcoming Golem alone. After you've done that, you'll notice a downward ladder; you can find a Theurgist Aura if you head all the way down. After they've been dealt with, go left of arch to find another Lesser Owlking and a Drake Vanguard. Behind them, you'll come across the Gift of the Grey Wanderer and a dead end. 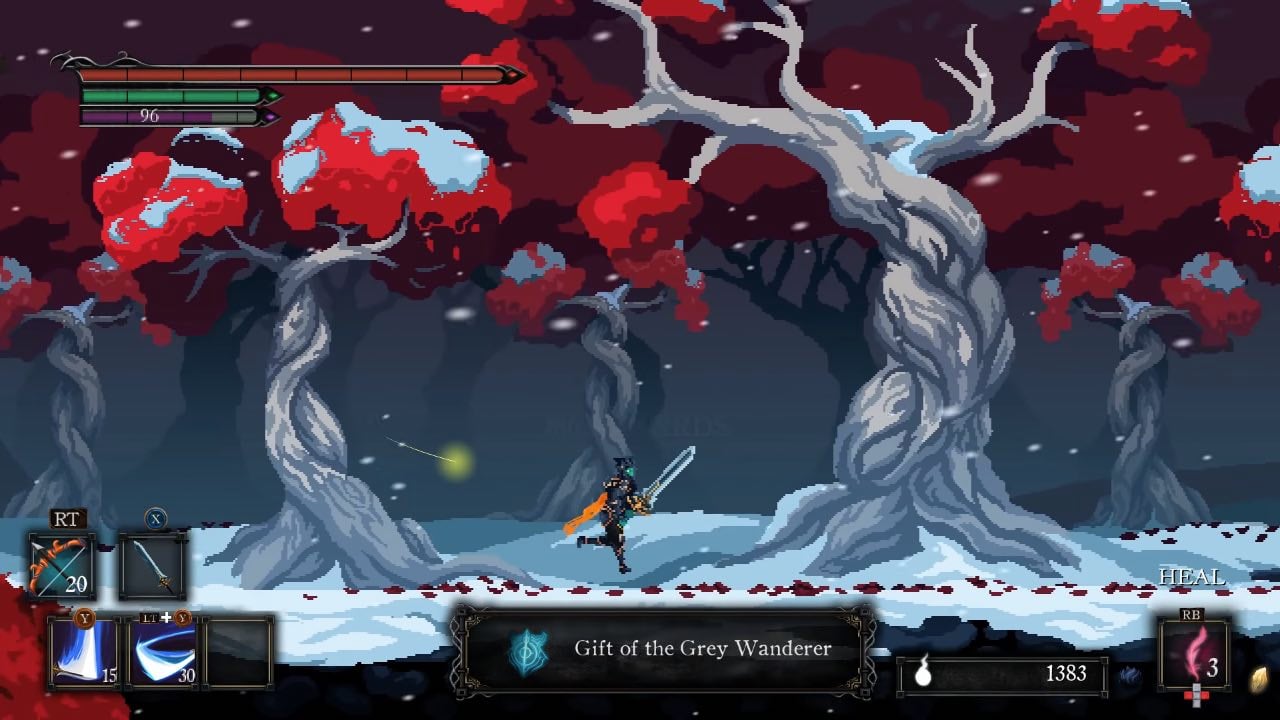 Once that's all done, head back up the ladder but instead of dropping off the edge, this time head up the next ladder to  pick up the Abyssal Eye (item). If you are an Acolyte of Death, you can also pick up another special item here. Head up the next ladder and destroy the Ice Shards before acquiring the Feather Upgrade on the left. Head right and climb the ladder.

Here, you'll find a small passage with two wooden planks in two seperate locations that you can use to go up into different rooms. The first one brings you to a room with a Golem and a living chest -the chest teleports elsewhere after hitting it once. Drop back down the wooden platforms and proceed to the next set. Here is where it gets a little tricky because you could find yourself trapped by lasers with not only a Golem but an Elite Drake Knight as well. Climb the ladder you find behind them. This will bring you to another section that is yet to be sealed off by lasers, holding two Lesser Owlkings and an Abyssal Eye. Head right until you find two ladders, each leading in a different direction. 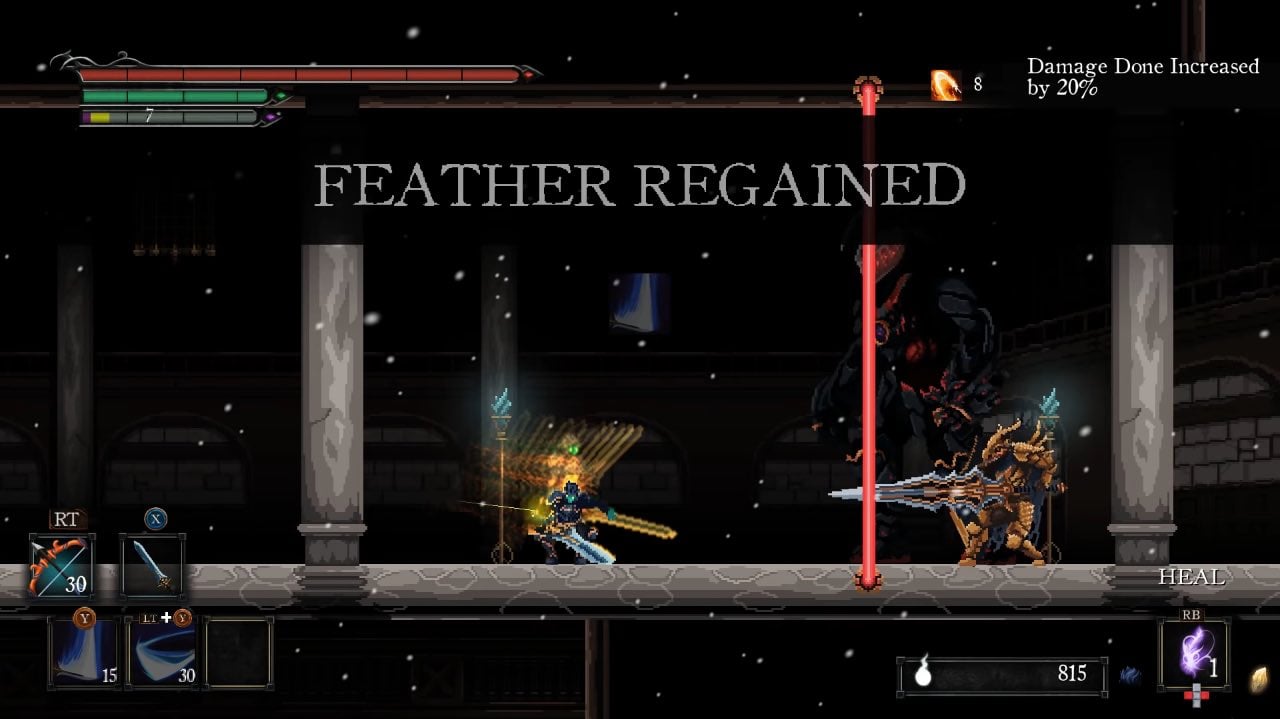 Take the downward one first, passing fire-breathing statues as you descend. This will bring you to the second Amulvaro Tome. Take it all the way down and you'll arrive at a platform with the living chest that teleported earlier, guarded by a few Ice Shards. Note that the living chest will continue to teleport every time you hit it, but will only do so on this platform from now on, until you manage to kill it; once it's destroyed, it drops an Immortalite Stone.

Head back up to the platform with the two ladders, and take the ladder up. Go through the doorway to reach a Save Point Statue.

Beyond this point, is a not-so-fun party. However, first head left until you come across the edge with a ladder, ignoring the ladders down and up on the way. The lower platform here will hold a Leaf of Gaia. From here, you can climb back up the ladder and jump onto the pillar to then double jump over onto the next one, on a lower platform with a Golem. From this one, double jump again in the same direction and you'll land on another pillar holding a Light of the Grey Wanderer. Return to the Save Point using a Crow Plume. 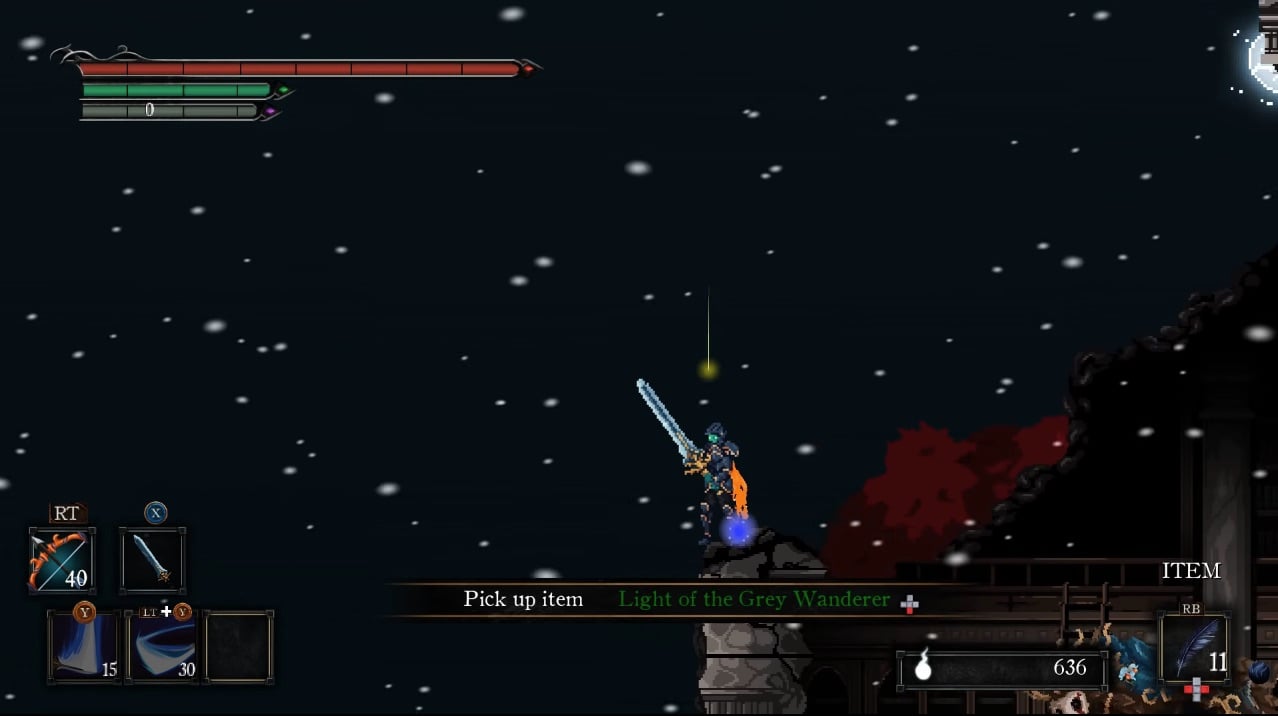 Here is where the party begins. The boss fight awaits up the ladder past the Save Point Statue, however it can only be accessed by completing the bottom first. So head down the ladder. This will bring you down to a 4-way split, with a path leading above and below a set of stairs, on either side.

Defeating each of the enemies in each of the areas will also add an affliction to the player. The objective: the player must carry all 4 afflictions up the ladder to access the boss door. Upon death, the player will lose all afflictions and will be required to restart the gauntlet. The affliction and recommended order of each room is listed as follows: 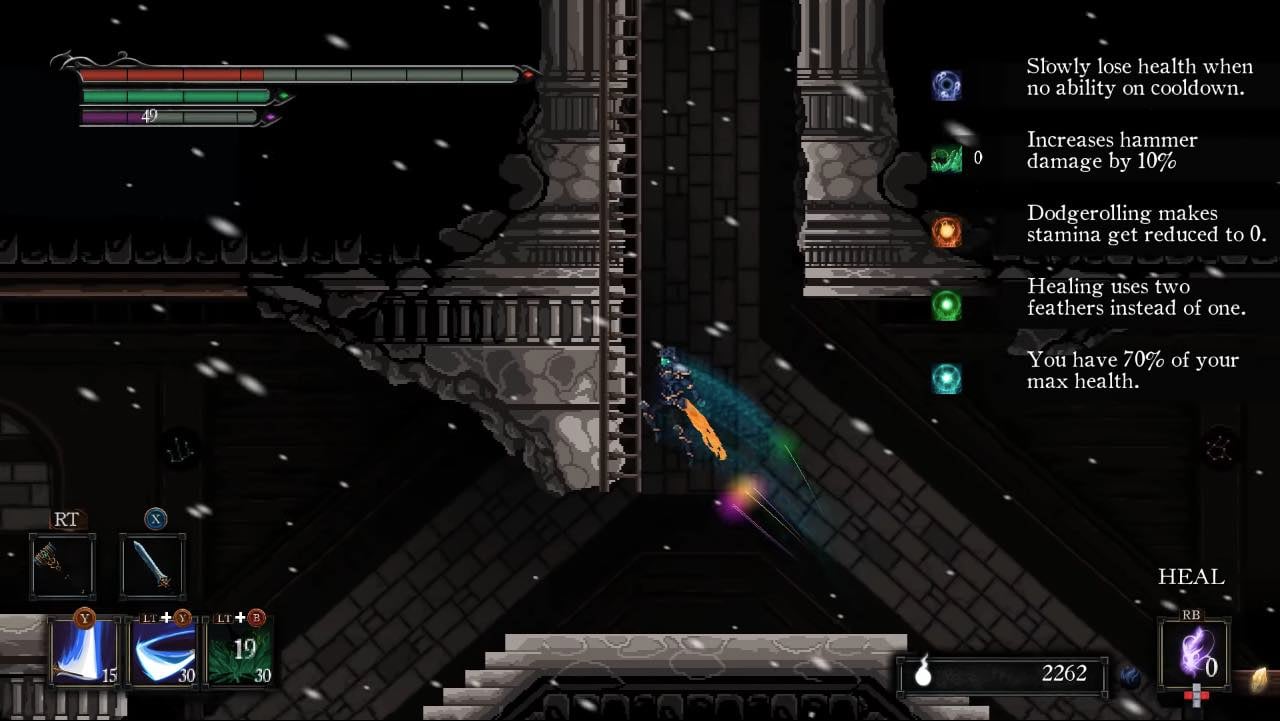 Once you've acquired all 4, it's a race against time up the ladders and to the boss doors. Upon opening the doors, you lose all afflictions. Enter into a long corridor. Head left and continue left, until you've reached the end and find an Immortalite Stone. Head back to the Save Point Statue to heal, before returning to speak to Amulvaro. At the end of your exchange, he will bring you to an astral plane to commence the boss fight. 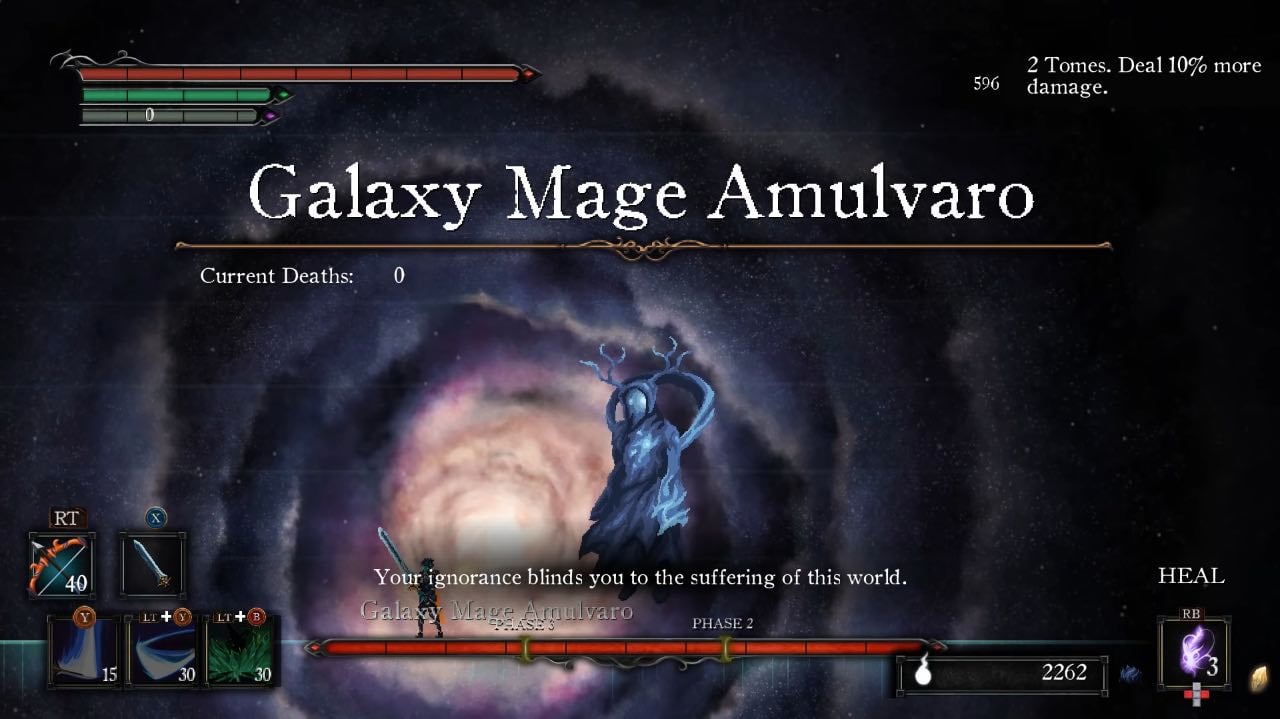